Based on the intuition that natural language is an effective and radical solution to the lack of interoperability within the Internet of Things, it seemed natural to us to look somewhat at its origins. There is a numerous scholarly literature on this subject, to which the curious reader can refer.

The origin of the appearance of natural language, one of the greatest mysteries of all time, gives rise to many controversies. Some believe that brain size is decisive (although some animals such as primates, birds and even bees have rudimentary language). Others argue that a low larynx position is necessary for the formation of an articulated language, which limits candidates in time and species. Finally, the sociological hypothesis proposes that language has developed gradually thanks to the advantages it confers on those who master it (more effective hunting and gathering, better protection against animals and hostile tribes, etc.).

However, there seems to be a consensus that only Sapiens (and perhaps Neanderthals) possessed a natural language as we hear it today (despite others believe that Lucy, a graceful Australopithecus more than 3 million years old, had the physical characteristics necessary for language, although we do not know her intellectual and social talents).

The first language was spoken (perhaps supplemented by signs). Written forms of language have only recently appeared in Mesopotamia and Egypt (about 5,000 years ago), with the emergence of agriculture, sedentary living and the resulting social organization: accounting documents (clay tablets) , civil code (Hammurabi code), epic stories (texts of the pyramids).

The Swiss scholar Ferdinand de Saussure (1857-1913), often referred to as the father of modern linguistics and semiotics, insisted on the arbitrary relationship between the word (the signifier) and the thing (the signified). The cry of a cow is not “cow” and the sequence of signs “c o w” does not particularly look like the animal: there is therefore a transition from the tangible to the abstract (both oral and written), and then sharing this convention between the interlocutors. Which is not a small wonder.

French physician, Paul Broca (1824-1880) first identified the area of language in the human brain. One of his patients (Mr. Leborgne) with profound aphasia was unable to communicate (apart from the onomatopoeia “Tan Tan”, which became his nickname), albeit with normal intellectual abilities. At the time of his death, examination of his brain revealed a brain injury in the left lower frontal cortex, later called the “Broca’s area”. Shortly thereafter, the German neurologist Carl Wernicke (1848-1905) showed that another area of the brain (“Wernicke’s area”) was also involved in the production and understanding of language.

Finally, in the second half of the 20th century, the famous American linguist Noam Chomsky proposed the existence of a primordial language, from which all the others would derive. It is said to be directly sourced from genetic abilities, and should be detected in the languages currently in use. This original language has not yet been discovered, partly because of the peculiarities of the current languages that blur these common roots. And since it is likely that several linguistic centers have appeared simultaneously in the world, this question remains particularly difficult.

Children are the real magicians of language

The little child acquires language in a particularly intriguing way. Before his birth, he discovers the useful sounds, transmitted by his mother (literally his “mother tongue”). He gradually refines his ability to recognize them, to the detriment of other (a Japanese does not “hear” the sound “v” or “l”; likewise a Spanish “v” sounds like a French “b”). Then the child learns (discover?) by himself a rudimentary syntax and becomes able to make simple sentences. The acquisition of vocabulary is a breeze: above 1,000 words from 3 years old!

What is really surprising is that language learning does not involve “big data”, gigantic corpora, learning more or less deep… Around the world, children learn to speak without a grammar book, with very few trial/error cycles. And yet it works! This simple observation, accessible to all parents, makes specialists lean towards the existence of innate abilities to master natural language, in addition to the cultural aspect (interactions with the entourage).

The transition from the thing (the signified) to its abstract representation (the signifier) is already a tour de force in itself. The ability to do so with a flexible syntax, using few signs while supporting an infinite number of shapes, is another. We have integrated these two aspects so well that we are not even conscious of them.

Since natural language works so well for communication between people – why not use it to make infinitely simpler and more concrete things communicate? 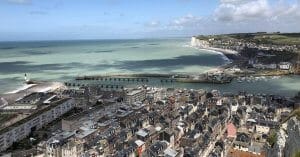 The impact of a new law decree for public buildings 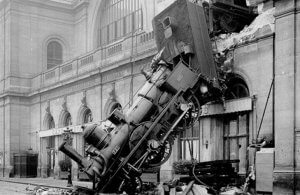 The curse of the last mile 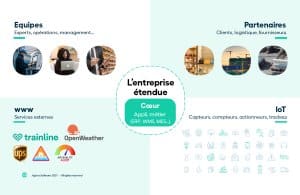 Borderless processes for the extended enterprise